Wisefire is the current Archon of the Realm of Kutanda. For his ability to bend his form to that of a man, he is sometimes known as the Burning Man.

His primary ability is that anything that he burns or someone with his Spark burns, he immediately gains the knowledge of as though he had known it for years. Upon infiltrating Kutanda, he burned its grand library to the ground, gaining all of the knowledge and power that it contained.

After the library was destroyed, he set fire to Kutandan army, gaining their memories as his own. This act so horrified him, that he locked himself away in Kutanda, becoming its Archon without the authorization of the Emperor - but because of his knowledge, remained unchallenged.

It is rumoured that the act has made him a homonculus, reliving the pained and tragic memories of those he killed, and forcing him to relate to them and sometimes adopt parts of their identities as his own. If this is true, it is a well-kept secret - like all secrets within the Crucible.

Wisefire is one of the more level-headed archons despite his intimidating appearance. He has been known to invite his enemies to games of wit and guile, allowing them safe passage to and from the Crucible. The promise of safe passage is one that he has never broken. 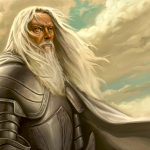